Yup, we grace to cover of October’s BeatRoute. Read the full story here! 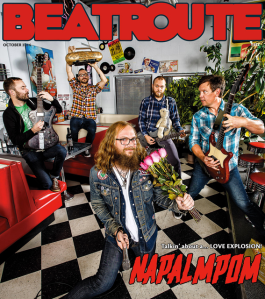 CALGARY — The first time I saw Napalmpom live, the gregarious kid-in-a-candy-store lead singer, PJ Lavergne, reminded me of the movie Step Brothers where the main characters heads spun with “so many activities!” The statement is accurate, but not in the way you might immediately assume.

For those of you who haven’t seen the movie: do so, it’s hilarious. For those of you who have, you might assume that is a band of buffoons who are stunted in both growth and intelligence and guitar amps are the only power tools they should be allowed to operate. On the surface, Step Brothers is a movie about two man-boys whose failure to develop past dick jokes and tree-houses is played up for laughs, but it goes deeper than that. Ultimately it is about how the world will attempt to bleed you dry of your enthusiasm for things that are genuinely joyful and how important it is, no matter how many job interviews you screws up, to hold on to the guileless boldness of your youth because it keeps you real.

Napalmpom embodies that definition with a great deal of gusto.

“When I think of the thing that changed my life, it’s rock and roll music”, says guitarist Shawn Petsche. “So writing songs that are trying to pay tribute to that or engage with it in some kind of meaningful way, it’s kind of ummm… embarrassing. ‘Cause if someone doesn’t like it, it’s like ‘Well that’s the thing that changed my life and I’m writing a song about it.’ So it can be a little upsetting at times when people dismiss you as a joke band.”

When talking to the men of Napalmpom, you can see how people in the more jaded circles of the music business could chalk them up that way. They talk with nerdy enthusiasm about most things they are into and cite having fun as their prime motivation in not only playing music but listening to it and creating it. This love of a party-show atmosphere started early and was a direct instigator in the formation of the original lineup.

Tapped to take part in a Guy Fawkes Day fundraiser in 2011, Petsche was asked by bassist and friend Ian Baker to form a tribute band to play at the event. He agreed as long as he was able to cherry pick a group he knew could handle bringing one of his seminal influences, Tricky Woo, to tribute justice with very little time. Then, with Baker, he called guitarist Craig Evans, drummer Matthew Bayliff and newbie front man Ian Thomas Day and the early days of the thing they call Napalmpom began.

“By the second jam, I had written some riffs that Craig was playing on top of and we’re ‘Oh, this is kind of good actually’. So we played the show and we had a good time and some friends nudged us to kind of stay a band and so we did”.

It wasn’t long before Day moved to the UK to “do grown up things” and the band was left to find another voice for their brand of celebratory rock and roll, deciding to “find the biggest kid we knew,” according to Petsche.

“PJ was at the front of the stage for every show we did so basically he just walked onto the stage one day,” laughs Evans. When asked about their penchant for playing with a first-timer front man, Evans explains, “You know how Christmas gets really boring when you get older? And then all the sudden your nephews and cousins all come over and they lose their shit cause its Christmas? It’s kind of like that.”

That’s an accurate account watching Napalmpom perform. Lavergne beams from ear to ear through every song and gives it his absolute all. Following the peacocking footsteps of his hero Freddie Mercury, Lavergne is the epitome of living the dream.

“My biggest fear is the Looney Tunes skit where that big mean dog is patrolling the neighborhood and there’s the Jack Russell terrier. I live in fear of being that Jack Russell terrier, with boundless energy just annoying the four of you,” Lavergne laughs referring to his eager attitude amongst his peers. He adds, “The first show was like a lifetime’s worth of Christmas mornings wrapped into 45 minutes. I’m absolutely having the time of my life, it’s so much fun.”

Fun is an omnipresent theme when discussing music with Napalmpom. And the love of party shows started early for its members. Shawn Petsche recalls getting the itch in his teens attending his first Tricky Woo show in Montreal on a whim after he was enticed by a gig poster. His love of rock music continued until the genre had trouble shaking a bad ‘90s funk that drove it into the ground.

“There were a lot of quality garage bands and punk bands and rock bands and it was all fun. But then I kinda got bummed out during the last five to ten years because a lot of the rock that people were listening to just kind of lost of the fun part. I found it was really hard to go see the kind of rock and roll I really want to see which are party shows essentially. It got to the point where I was like well, no one else is doing it for me so I better just do it myself.”

Lavergne punctuates: “If you want it done right!”

Craig Evans also got the bug in Montreal when he took in a Mudhoney/Superchunk bill. Though Evans’ tastes include many things, from noise to hardcore, it’sthe “freedom inducing good times” that he ultimately thirsts for.

“Like so much heavy music and maybe aggressive music, there seems to be a lot that is preoccupied with being masculine. And it’s sort of a bummer, you know? Like, ‘That’s no fun. Why are you being all tough? This is a party, man!’”

With comments like that, one could chalk up Napalmpom to just a party band with little substance. But digging a little deeper reveals intention and theses that run the gamut from operatic musical direction to commentary on image and conformity.

When you first hear the band is releasing their album, The Unconditional Love of Napalmpom, and the album jacket is a matte finish, black and white drawing where the first 200 copies come with markers to colour in said drawing, you might think what a wackadoo idea trying to solidify their credence of “fun”. There may be something to that, but this isn’t just some half-assed mock up, rather the cover designed by local artist Geoffrey Hanson who has created cover art for Kings of Leon, Alabama Shakes, Velvet Revolver and most recently Robert Plant’s new single. Wackadoo like a fox.

Then there’s the music…

When you first hear about Greg Ginn’s Sweater, the cheeky title, the references to the Hockey Sweater Story, the plucky riff that starts it all, you might assume it’s a jokey Canadiana anthem track. Listening closer that riff bookends a sophisticatedly orchestrated hardcore track that ebbs and flows back to its starting point like the abridged rock opera it was meant to be with lyrics urging to embrace who you are and not define yourself by a uniform. The theme, near and dear to Evans, extends not only to punk rock uniforms worn by fans but also to the veracity of the bands themselves.

“From playing bands in the ‘90s, there were bands that just took themselves way too seriously and it stopped being fun. Being a kind of analytical guy and doing bookings too at that point, I would be watching to see which bands are good and I’d be like, ‘Ok I’m calling bullshit on this. There’s no way that you mean what you’re doing.’ I can understand needing to get those songs out once and a while but to just wallow in that and play that just because it’s fashionable at any particular time, I just found that bothersome.”

Shedding the desire to be “fashionable” in favour of bringing a bold and fervent pulse back to rock and roll music not only drives Napalmpom’s motivation, but it’s clearly evident in the final product.

“You get bands that play genres that aren’t overtly fun,” says Petsche. “And people say, ‘Oh, this is a really sincere song’ or ‘this is a really smart song’ and they don’t tend to associate those things with rock music. The songs we sing are love songs, it’s just the subject is rock and roll music itself.”

This comment incites laughter from Evans and Lavergne, but they are true lovers of rock and roll.

“Even before I was in the band, it was always great just going to a rock show and it was the same watching you guys then as now. I just had the stupidest grin on my face the whole time,” says Lavergne.

“If you’re not having a good time, why are you doing it?” says Petsche.

This brings us back to Step Brothers where defend their return to being the enthusiastic souls they once were: “When I was a kid, when I was a little boy, I always wanted to be a dinosaur. I wanted to be a Tyrannosaurus Rex more than anything in the world. I made my arms short and I roamed the back yard. I chased the neighborhood cats, I growled and I roared, everybody knew me and was afraid of me. And one day my dad said, ‘Bobby you are 17, it’s time to throw childish things aside.’ And I said, ‘OK pop.’ But he didn’t really say that, he said, ‘Stop being a fucking dinosaur and get a job.’”

Napalmpom turns being that dinosaur INTO a job. Experience a Napalmpom show, watch them at work, be a dinosaur too. It’s fun.